The Fastest Growing Occupations and Industries in the United States 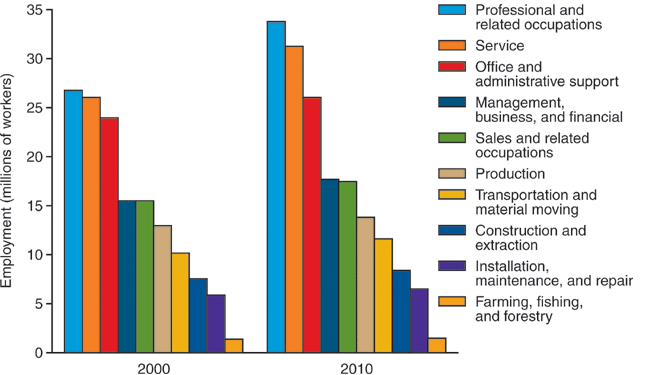 Figure 1-5. Employment by major occupational group, 2000 and projected to 2010. BLS projects employment to increase by 22 million workers (to a total of 167.7 million) over the period 2000 to 2010. The largest numbers of workers will be employed in professional and related occupations and service. BLS estimates that these occupational groups will experience the greatest growth between 2000 and 2010, with employment increasing to 33.7 million for professional and related occupations and 31.2 million for service occupations.
(Source: BLS [2002a].)

Similar trends are true when you add in the year 1990. 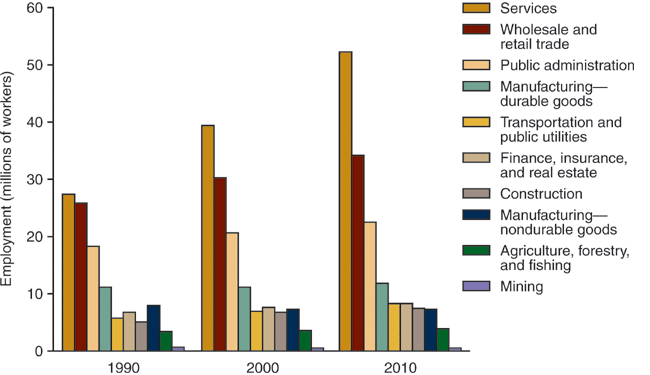 Figure 1-6. Employment by major industry division, 1990, 2000, and projected to 2010. BLS projects employment to increase by 22 million workers (to a total of 167.7 million) during 2000-2010. The largest numbers of workers will be employed in the services and wholesale and retail trade sectors. BLS estimates that these industrial sectors will have the greatest growth between 2000 and 2010, with employment increasing to 52.2 million for services and 34.2 million for wholesale and retail trade.
(Source: BLS [2002a].)

The occupations projected to have the most growth between 2000–2010 are computer and network related. 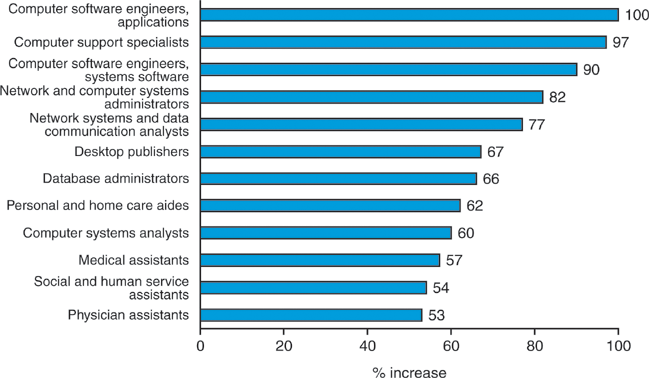 Figure 1-7. Occupations projected to have the most rapid growth during the period 2000-2010. The fastest growing occupations are computer- and health-care-related jobs. The numbers of computer software engineers and support specialists are expected to increase 100% and 97%, respectively. The numbers of medical and physician assistants are expected to increase 57% and 53%, respectively.
(Sources: BLS [2002a]; Hecker [2001].)

However, the occupations that are expected to add the most jobs overall during the 2000-2010 period are different. They include food preparation and customer service workers. 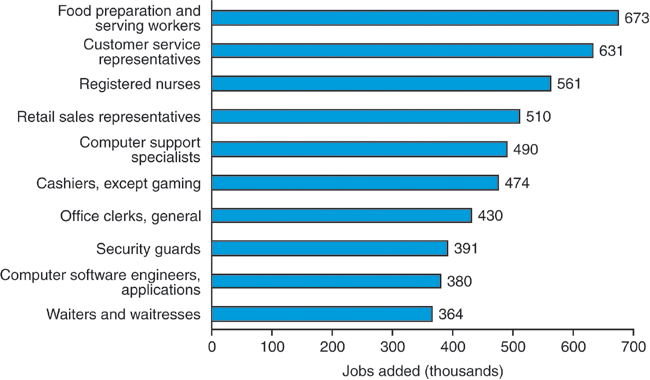 Diversity in the American Workforce 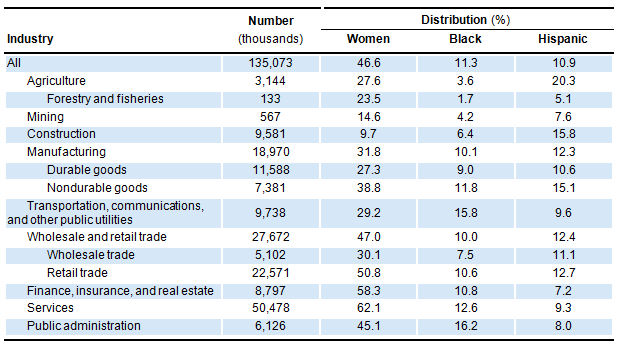 Table 1-4. Number of employed workers by major industry sector and percentage of female, black, and Hispanic workers, 2001. Most workers (71.9%, or 97.1 million) were employed by the services, wholesale and retail trade, and manufacturing sectors. Female workers accounted for nearly half of all workers (46.6%) and for more than half the workers in services; finance, insurance, and real estate; and retail trade. Black workers accounted for 11.3% of all workers, but public administration and transportation and public utilities had the greatest proportions of black workers (16.2% and 15.8%, respectively). Hispanic workers accounted for 10.9% of all workers, but agriculture and construction had the greatest proportions of Hispanic workers (20.3% and 15.8%, respectively).
(Source: BLS [2001].)

Jobs That Have Moved Overseas

Jobs created by U.S. companies are increasingly being filled overseas where the cost of doing business is lower. The living wage may be significantly lower than it is in the United States and the degree of government regulation may also be lower. Therefore, many companies find that they can lower their costs and increase their profits by outsourcing their work.

So, it is important to carefully consider the impact of outsourcing American jobs. It is also important to position yourself to be able to compete in the fasting growing occupations and industries in the United States. That way you will be well prepared for the future job market in America.