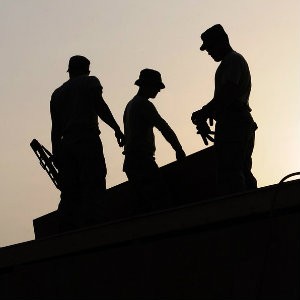 You Can Get Workers’ Compensation After a PA Construction Accident

There are many potential hazards on Pennsylvania construction sites. Despite safety precautions such as hard hats and steel-toe boots, construction workers are at constant risk of on-the-job accidents and potentially life-threatening injuries.

There is no denying that construction is a dangerous industry, yet not all construction trades are the same. The construction field is comprised of a variety of subcontractor fields. Workers in each field have unique risks associated with their professions. Consider this data collected by the government from 1992-2001.

Figure 4-20. Average distribution of full-time construction workers by trade, 1992-2001. Among the trades monitored by CPWR, the estimated distribution of employed construction workers by trade ranged from 0.6% to 13.3% during 1992-2001. Carpenters made up the largest proportion of construction workers (13.3%), followed by construction laborers (8.8%) and electricians (5.9%). (Notes: (1) Apprentices are included for some trades when data were available. (2) All other includes managers, professionals, supervisors, clerical workers, sales personnel, and trades that each totaled less than 1% of the industry. (3) Computations were based on a definition of full-time work as 2,000 employee hours per year.) 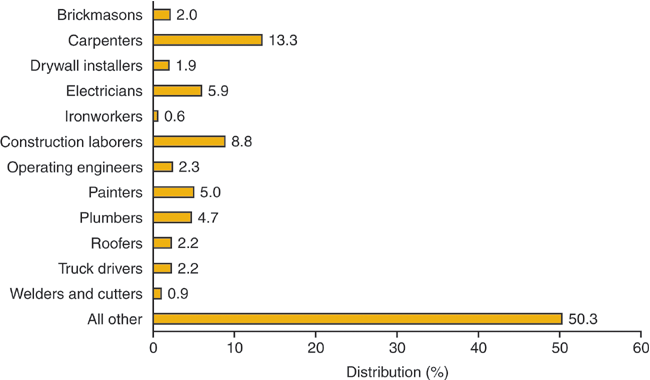 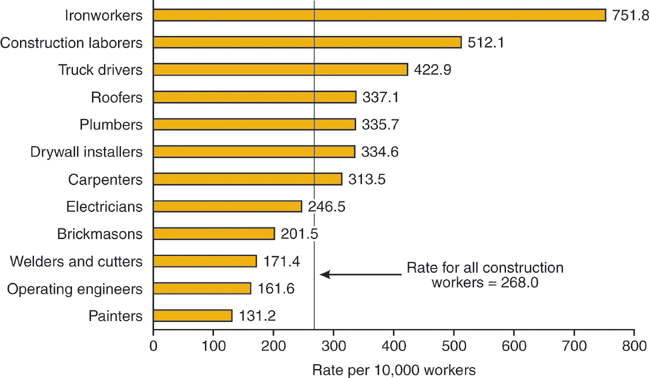 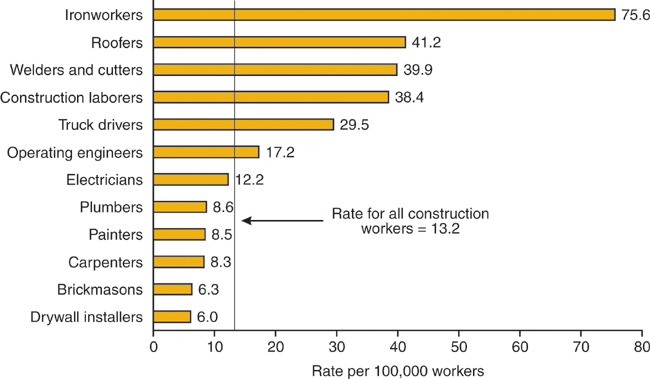 The average rate in 2001 was 4.4 fall-related deaths for every 100,000 workers. The two groups that exceed the average rate most significantly were the groups with the highest number of overall fatalities:  ironworkers (66.8 percent) and roofers (30.1 percent). 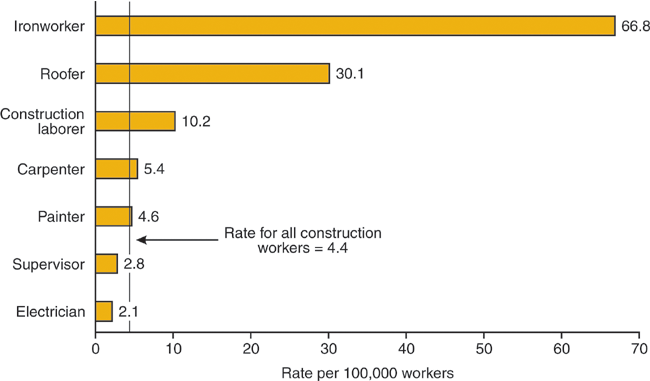 Injured in a PA Construction Accident? Our Lawyers Can Help

Pennsylvania Workers’ Compensation law was created to avoid costly lawsuits between employers and their workers. A worker who is hurt on the job can collect benefits without considering whether the employer, a coworker, or the employee himself may have caused the injury. However, the same state law forbids workers to sue their employers or coworkers if a negligent act causes an injury.

But, there is an exception. In some construction site accidents, a worker may be injured by the negligent actions of a subcontractor or a visitor to the worksite. When someone outside the employee’s causes an injury, it may be possible to recover additional money by filing a personal injury lawsuit against the third party.

No matter what the situation, it is important that a construction worker who is injured on the job discuss the situation with a Pennsylvania construction injury attorney. Call Larry Levin and Jay Shor—the Bulldog Lawyers— at 866-462-8553. We’ve been fighting for the rights of injured workers for over 20 years. Ask to schedule a free consultation; we’ll look into your case and advise you of your rights. If you choose to work with us, we’ll make sure you get all the compensation you deserve.

The truth is that there are thousands of hazards on every construction site. Construction trade workers must navigate around live wires, ladders, scaffolds, power tools and heavy machinery simply to do their job. This means that builders, home remodelers, roofers, carpenters, and electricians have some of the most dangerous jobs in the United States. The U.S Bureau of Labor Statistics recorded 796 construction work-related deaths in 2013, more than in any other industry.

However, on-the-job hazards like electricity and scaffolding aren’t the only reason that construction trades have high injury rates. Construction sites are busy places; it is not unusual for several tasks to be going on at once as multiple teams of workers complete different aspects of the overall project. But, there is little supervision of the teams to assure that individuals and teams don’t create safety risks for each other. A construction site manager can provide some guidance, but he can’t be everywhere at once—and it’s easy for a subcontractor to make a tiny error that becomes a construction site fatal injury risk for another worker hours later.

Years of experience have taught our PA construction accident injury lawyers that any type of accident can occur at any workplace. However, each type of occupation is more likely to be exposed to a particular set of injuries. Our clients in the construction and building trades most often experience the following job-related complaints:

Workers’ compensation provides benefits for past and future medical expenses, partial replacement of job income, occupational training, and physical therapy. It does not compensate a construction worker for his pain and suffering. Although many workers in the construction trades are labor union members, it is important to know that you may not be able to use health insurance from your job for an injury that is covered by workers’ compensation.

Larry Levin and Jay Shor—the Bulldog Lawyers—have been fighting on behalf of injured workers for over 20 years at their Pennsylvania workers’ rights law firm. They know that injured workers are entitled to fair recovery when they are injured on the job. We can help anyone who is fighting his or her employer or the insurance company over workers’ compensation benefits in Pennsylvania. If you were injured at a construction site and your benefits have been delayed, denied, or terminated too early, please contact our offices in Reading, Philadelphia, and Harrisburg at 866-462-8553.