The Dangers of Mining Work

Mining is a dangerous industry. In fact, in 2002, mining had a higher rate of fatal injuries than other industries. 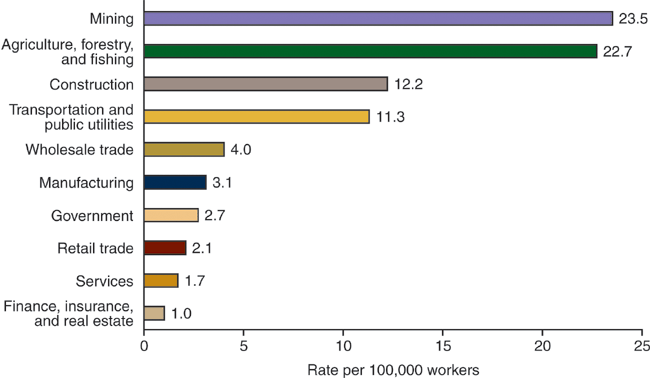 News of a mine collapse often makes national news. While a mine collapse is certainly a danger inherent to the mining industry and one that is often fatal, there are many other dangers that miners face every day that they are on the job. Those risks include injuries and fatalities from falls, fires, explosions, electrical accidents, toxic dust and noise. There are short term risks from accidents and explosions that might result in an acute injury or fatality. There are also long term effects from dust and noise that can result in serious respiratory diseases and hearing loss.

Which Miners Are At Greatest Risk? 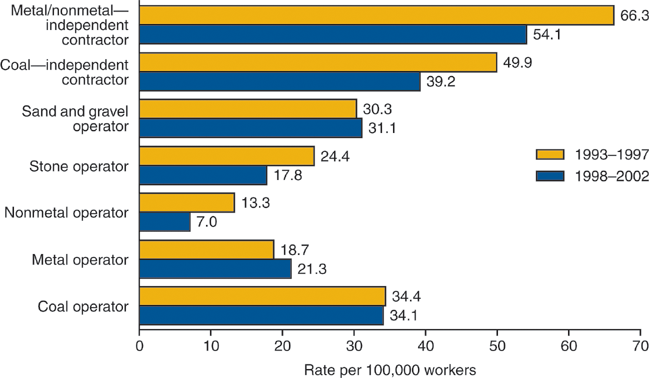 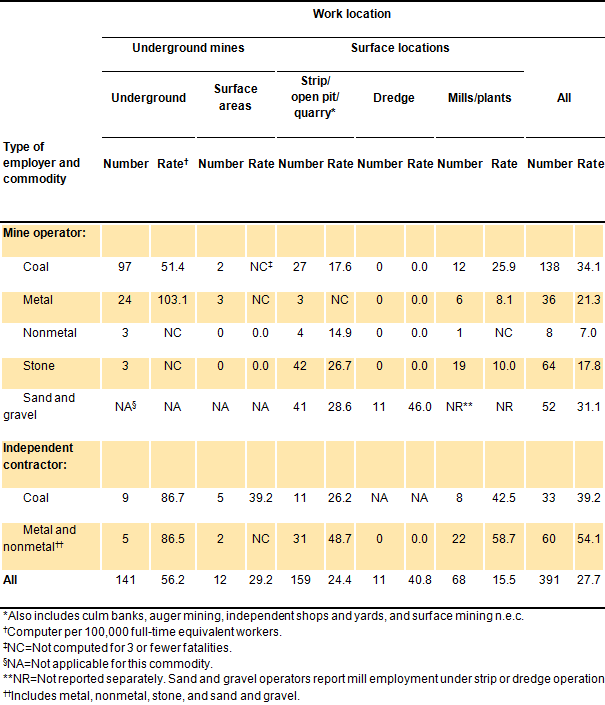 Table 4-1. Number and 5-year average rate of fatal mining injuries by type of employer and commodity at various work locations, 1998-2002. Underground mines posed the greatest risk of fatal injury to mine workers during 1998-2002. At these mines, the highest fatal injury rates were among metal mine operator workers and all independent contractor workers. At surface locations, the highest fatal injury rate was at the dredge. All 11 fatalities at the dredge occurred at sand and gravel mines. Within each commodity, fatal injury rates were highest for independent contractor workers at two metal/nonmetal surface locations: strip/open pit/quarry and mills.
(Sources: MSHA [2003]; NIOSH [2003].)

How Are Miners Hurt? 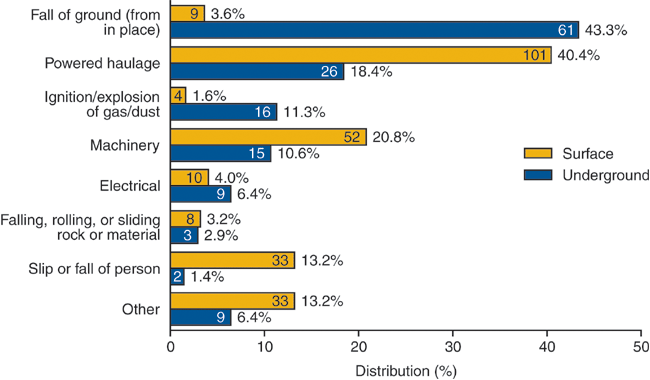 Figure 4-7. Number and distribution of fatal mining injuries by type of incident and work location, 1998-2002. During 1998-2002, most fatal injuries to miners working at surface mining locations (61.2%) were associated with the use of powered haulage (such as motors and rail cars, conveyors, bucket elevators, vertical manlifts, shuttle cars, haulage trucks, and front-end loaders) and machinery (for example, electric and air-powered tools and mining machinery such as drills, draglines, power shovels, and loading machines). Most fatal mining injuries underground (43.3%) were classified as fall of ground (that is, fall of roof or back).
(Sources: MSHA [2003]; NIOSH [2003a].)

Workers are also affected by respiratory diseases such as pneumoconiosis or black lung disease. The number of workers affected has decreased over time. However, it still remains a problem in the mining industry. 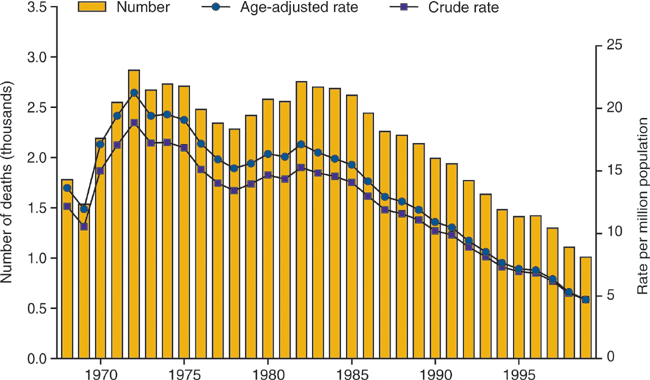 Figure 4-19. Numbers of deaths, crude mortality rates, and age-adjusted mortality rates for U.S. residents aged 15 or older with coal workers’ pneumoconiosis recorded as an underlying or contributing cause on the death certificate, 1968-1999. After passage of the Federal Coal Mine Health and Safety Act of 1969, an increase occurred in the number and rate of deaths reported with coal workers’ pneumoconiosis (black lung) recorded on the death certificate. The number and rate of these deaths were at their lowest in 1999, the last year for which data are currently available. The number decreased from 2,870 in 1972 to 1,003 in 1999. In 1972, the crude and age-adjusted mortality rates were 18.9 and 21.2 per million population, respectively. Both rates declined to 4.7 per million in 1999. (Note: Age-adjusted mortality rates are standardized to the year 2000 standard population.)
(Sources: NCHS [2002]; NIOSH [2002].) 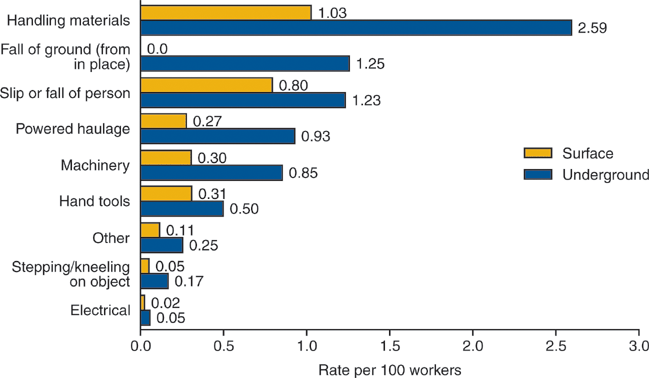 Figure 4-11. Rate of lost-workday injuries by type of incident and work location, 1998-2002. During 1998-2002, miners at underground locations generally had higher nonfatal injury rates than those working on the surface. Injuries to miners at both surface and underground locations were most frequently associated with handling materials and slip or fall of person. Miners working underground also had relatively high rates of injury from fall of ground incidents (caving rock), or in incidents involving powered haulage or machinery.
(Sources: MSHA [2003]; NIOSH [2003a].)

Are There Safer Alternatives?

Mining safety continues to be a focus of the federal government and private industry. For example, in 2006 the government passed the Miner Act to develop and implement safety technology in the underground coal industry. Also, other types of energy, such as nuclear energy, can also help alleviate the need for coal mining by developing alternative energy sources.

Mining continues to be a dangerous, yet vital industry in the United States. In order to prevent future injuries and fatalities, it is important for new safety measures and mining alternatives to be fully explored and implemented.