Tendonitis is a common condition which affects many American workers and results in physical pain and time away from work. Accordingly, it is important to understand what tendonitis is, what causes it and how it can be treated.

Tendons are the tissues that connect muscle with bone. When the tendons become inflamed, the medical term for the condition is called tendonitis. Tendonitis most often affects the tendons in the hands and wrists but can occur anywhere in the body. A person with tendonitis will likely experience pain, swelling and inflammation in the affected area. While these symptoms are similar to other conditions, a medical doctor can accurately diagnose and treat tendonitis.

Tendonitis develops because of a repetitive use or overuse of a certain area of the body. It can also develop from poor technique when using certain parts of the body. There are a number of occupational hazards that can result in tendonitis including typing and lifting heavy objects. Anyone who does repetitive movements consistently on the job can be at risk.

Is Tendonitis A Problem?

In 2001, tendonitis caused more than 14,000 days of absences among workers in the private sector. The greatest number of lost days was among operators, fabricators and laborers followed by technical, sales and administrative support workers. 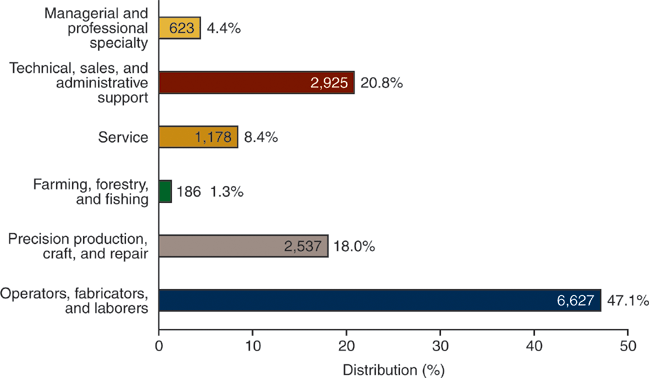 Figure 2-66. Distribution and number of tendonitis cases involving days away from work in private industry by occupation, 2001. Operators, fabricators, and laborers represented 47.1% of tendonitis cases in 2001. Two other occupations accounted for nearly 39% of the cases: technical, sales, and administrative support (20.8%); and precision production, craft, and repair (18.0%). Private industry reported an overall rate of 1.6 incidents of tendonitis for every 10,000 full time workers in 2001. The manufacturing, construction and transportation and public utility industries had incidents above the average rate of 1.6, however. 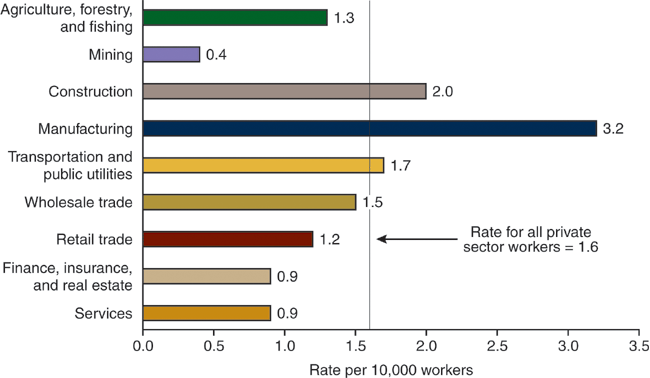 How Is Tendonitis Treated?

There are a variety of treatments available for tendonitis. The treatment prescribed by a doctor is usually determined based on the severity of the condition, the patient’s age, overall health and treatment preferences. Possible treatments include modifying regular activity, demobilization of the affected area by use of a splint, physical therapy, steroids, anti inflammatory medication and sometimes surgery. Tendonitis is a painful injury that affects many American workers and results in many days lost from work which harms their employers. Accordingly, it is important for employers to train workers on how to avoid tendonitis especially if their jobs include repetitive movements such as typing, lifting or carrying.

Yes! Once a claim has been approved, treatments directly relating to the injury should be covered by workers’ compensation insurance. In some rare cases, treatments that are considered experimental may require pre-authorization.

It’s not uncommon for a legitimate workers’ compensation claim to be denied. In fact, around 50% of all claims are initially denied, despite the fact that these claims should be paid regardless of who was at fault. The most frequent reasons a denial is given include mistakes made on the claim form and an employer contesting the claim.

Many wonder why an employer would contest a claim – after all workers’ compensation was created to protect them just as much as the employee. After a claim has been filed, the employer is kept safe because the employee is prevented from filing a personal injury lawsuit against them. There is one simple answer to this question: money. Just like any other insurance policy, if a high number of claims are made, the premiums go up, which means that your employer spends more money. Most of the time, the employer simply claims that the injury happened outside of the workplace, leaving the injured worker to prove otherwise.

Regardless of why the claim was denied, if you receive a denial letter, you should contact an attorney as soon as possible.

How Can An Attorney Help Me?

At Shor & Levin, we have been dedicated our careers to the in-depth study of the law, particularly workers’ compensation, social security disability, and personal injury. We can help you from day with one with filing out forms, collecting the evidence necessary to prove your case, interviewing the witnesses to your accident, speaking with any insurance representatives on your behalf, and identifying all ways in which you or a loved one may be eligible for compensation. In fact, many of our clients can obtain more than one form of compensation but aren’t even aware of their options until their first consultation with us.