Previous Next
Rule Would Reduce Exposure To Crystalline Silica 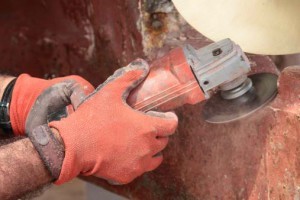 The current limits are outdated and inconsistent among industries and do not adequately protect workers, according to OSHA.

How Are Workers Exposed?

Microscopic particles of crystalline silica can be produced at worksites were rock, block, brick, mortar, concrete or industrial sand are present. Typically, crystalline silica is inhaled by a worker when cutting, grinding, sawing, drilling or crushing any of these materials.

Workers in foundries, sand blasting and hydraulic fracturing in the oil and gas industry are at the highest risk of inhaling crystalline silica. When a worker cuts into concrete, for example, tiny particles of crystalline silica may be released. The worker may inhale the particles if safety precautions are not taken. Applying water while cutting into the concrete can significantly reduce the amount of crystalline silica released during the cutting process.

Why Is Crystalline Silica Dangerous?

Referred to as “deadly dust,” crystalline silica can cause silicosis, lung cancer, and other lung and kidney diseases when inhaled at high levels or over a prolonged period of time.

Silicosis is an occupational lung disease that causes inflammation and scarring in the lungs. A silicosis sufferer may have shortness of breath, fever, skin discoloration and respiratory problems.

Unfortunately, silicosis is an irreversible condition that has no cure. Treatment for silicosis focuses on alleviating the symptoms and providing patients with the best quality of life possible.

Although silicosis and other conditions caused by exposure to crystalline silica are far more common in developing countries than in the United States, exposure continues to cause work-related illness in the U.S. OSHA hopes to save 700 lives and prevent 1,600 new cases of silicosis each year once the new rule is in place and functioning to its full effect.

Currently, OSHA estimates that 2.2 million workers are exposed to crystalline silica in the workplace. The majority are in the construction industry. The proposed rule sets two standards, one for general industry and maritime and another for construction.

If you or a loved one has become ill from exposure to crystalline silica at work, you may be entitled to Worker’s Compensation. Although the workers’ compensation system is intended to protect injured workers and their families, it can be difficult to navigate. If you have questions or concerns about your legal rights to compensation, contact the workplace injury attorneys at Shor & Levin, the Bulldog Lawyers, by calling 855-631-4775 or by using our online contact form.